Sierra Madre’s entry in the 2011 Tournament of Roses Parade

WINNER OF THE GOVERNOR’S TROPHY

– Best depiction of life in California – 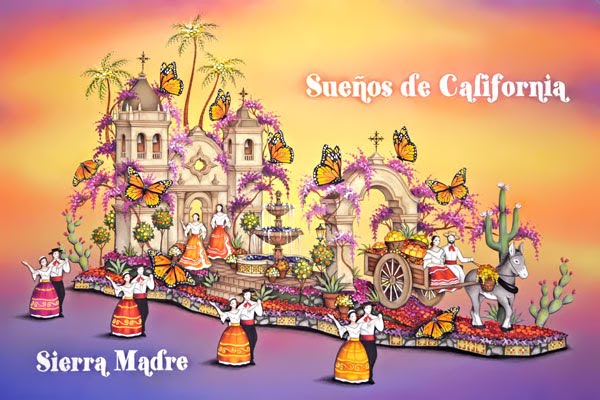 The theme of the 2011 tournament of Roses Parade is “Building Dreams, Friendships and Memories.” Sierra Madre’s entry is titles “Sueños de California,” which translates to “Dreams of California.” The design highlights California’s Latino heritage by remembering the pioneers who built our Golden State.

At the front of the float a burro draws a cart laden with produce to market. Magnificent monarch butterflies flutter overhead, alighting on Mission San Carlos Borromeo. Señoritas gather by a glistening fountain in a courtyard blooming with bougainvillea, saguaro, prickly pear and citrus trees. Colorful folk dancers perform alongside.

The float is one of Sierra Madre’s largest, measuring 33 feet tall, 55 feet long and uniquely, 22 feet wide. Extensive animation brings the design to life. The wheels of the cart turn and the gigantic monarch butterflies flap their wings. The fountain features hundreds of gallons of recirculating water.

“Sueños de California” showcases a stunning array of flowers. Jeweltone roses carpet the base of the float while dendrobium, mokara and phalaenopsis orchids simulate the bougainvillea that grows over the mission. The gardens are landscaped with a blend of live succulents, orchids, leucadendron, sansevieria, ginger and protea.

The design also makes clever use of edible decoration materials, such as rolled oats, cinnamon and sesame seed which cover the facade of the mission. A wide variety of beans, lentils and peas will be applied one at a time to over 100 painstakingly detailed Mexican tiles. The float also incorporates oranges, lemons, limes, and pink grapefruit.

In 2011, Sierra Madre celebrates its 94th year of Rose Parade participation and its 79th float. The Sierra Madre Rose Float Association is a nonprofit, all volunteer organization and is funded solely by private donations. The association strives to create a warm and welcoming atmosphere for volunteers of all ages. In the last six years, Sierra Madre has received sixconsecutive awards. The association is steadily building a reputation for fine craftsmanship and outstanding floral design. This year’s entry is designed by Charles Meier, who designed four previous award winning floats for Sierra Madre.